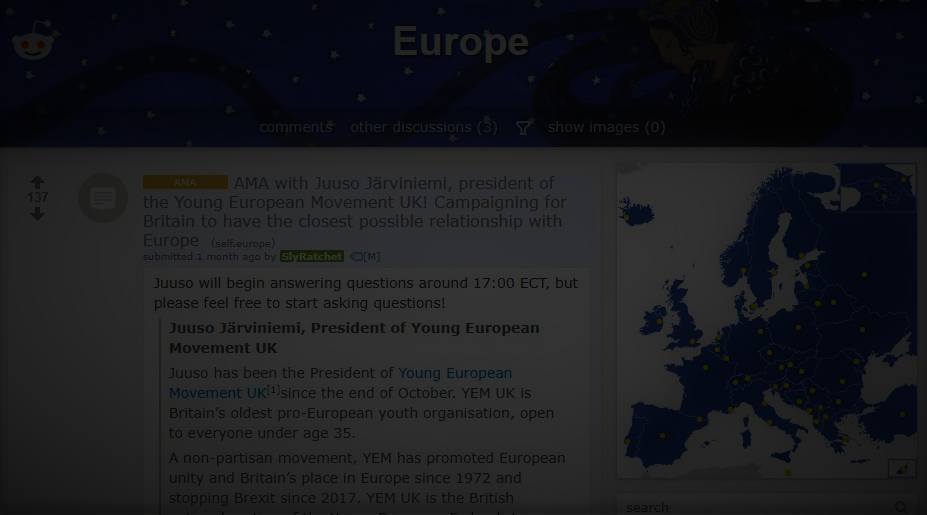 Musings from the Reddit AMA: Don’t lose sight of the bigger picture

On 3 January, I sat down in front of my laptop to engage in Reddit conversations for the first time in my life. Our International Officer Logan had arranged an Ask Me Anything (AMA) session for me on the r/europe channel. r/Europe is the default channel that the website asks Europeans to join as they create their account, which has helped it to grow into a community of more than 1.5 million users.

The live chat attracted dozens of questions and comments, and discussions on the thread have continued since I finished answering questions. As of the afternoon of the 6th, there were nearly 150 comments on the thread. Three hours and a half was enough for me to write 22 responses and comments to a range of questions. Everything from questions on how to get involved to whether, as an immigrant, I’m worried about being able to stay in the UK, to what European values and culture mean to me, to my thoughts on the European Union Act of 2011, and beyond!

Some of the more confrontational questions I did already answer, including the classic “Do you simple not care about the democratic outcome of the referendum?”, and the somewhat surprising “What were you smoking when you wrote that new years revolution blog entry?”. Some questions, such as ‘What needs to be done to Russians?’ and ‘Would you support the EU or the USA in a war?’ were perhaps interesting, but left unanswered this time. Perhaps “As a foreigner, what makes you feel entitled to tell the British electorate what it should choose for Britain?” would be one question that merits an answer in a future vlog!

Britain is European if Brits are European

While doing the AMA, I was somewhat surprised that many of the questions reflected on European identity and values, rather than the daily nitty-gritty of Brexit negotiations, parliamentary games and amendments to bills. Beside identity, broad questions on how the EU should be reformed were presented. Perhaps the session was a reminder to not lose sight of the bigger picture even when many detailed discussions so important to Britain’s future are taking place in the here and now.

In the short term, directly pushing MPs to give young people the European future they wanted may be necessary. In the longer term, however, convincing even more people to feel a sense of ownership of the European project remains paramount, and there is no better time to strengthen the sense of being European than now. If more British people took it for granted that they are British and European at the same time, the country would likely not be where it is now. Even if Britain is pulled out of the well now, unless the general public’s attitudes on this change, it might jump again. On the question of identity, time is on our side as new open-minded generations come of age, but only if we spend that time working for the cause.

Juuso is the President of YEM UK.